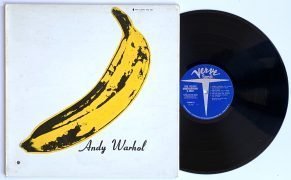 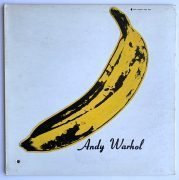 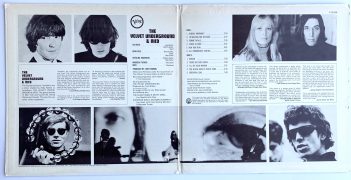 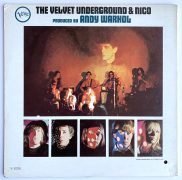 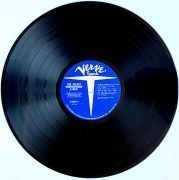 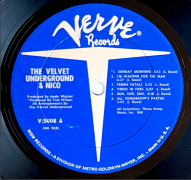 A Mono 1968 copy of The Velvet Underground & Nico, with fully intact Andy Warhol banana sticker.  This copy has a first pressing disc in the  slightly later version of the cover, with Eric Emerson’s torso airbrushed off the back cover.

The Andy Warhol designed album cover is in EX condition, and the fragile banana sticker is unpeeled and complete–rare, as most people tried to peek the banana from the top, and the tip tore off.  The sleeve has some very minor wear, a round punch out hold in the lower left corner, and an embossed + on the back cover below the hole (thes marked the album as a ‘cut-out’, which couldn’t be returned to wholesalers for full price).

The ‘West Coast’ disc is in VG condition visually, with a number of superficial marks, but plays very well, at least EX.  With the original Verve innersleeve.  An overall clean copy of a highly collectible classic.