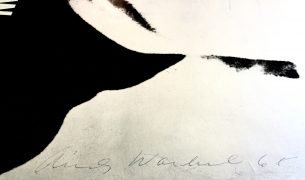 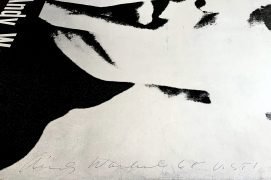 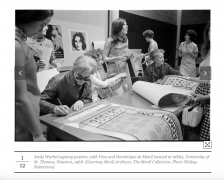 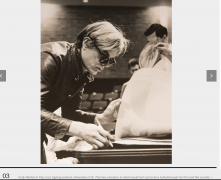 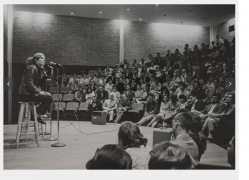 A rare poster advertising Andy Warhol’s 1966 exhibition at the Boston Institute of Contemporary Art, signed and dated by Warhol in 1968.  The ICA website notes this show was”only the second museum exhibition dedicated to Warhol, with nearly 40 iconic works—soon to become touchstones of 20th-century art history—as well as staging a performance of the landmark intermedia work Exploding Plastic Inevitable by Warhol and the Velvet Underground.”

This was a legendary exhibition for Warhol, and an an early performance by the Velvet Underground.  The exhibition opened on October 1, 1966 and the Velvet Underground played with the Exploding Plastic Inevitable on October 29, in a  show the Boston Phoenix newspaper included as #18 in an article titled “The 40 Greatest Concerts in Boston History.”

Warhol signed this in May, 1968 during a talk and appearance at the University of St. Thomas in Houston, Texas. We purchased this directly from the student who had it signed.  Her accompanying letter of authenticity notes: The University offered a media course in which I was enrolled. There were several artists of the time which were highlighted…and one particular night we had the chance to actually see and hear one of the artists after previewing two of his films…Andy Warhol. [He held] a question and answer session in Jones Hall… Warhol on stage and the person accompanying him was a local architect who pretty much ran the show and answered the questions for Warhol. I don’t recall Warhol ever actually speaking. It was strange though I did see a documentary on Warhol where the same set up occurred, another person did the talking.  After the meeting in Jones Hall we went into another section of the hall where Warhol signed posters which were supplied for that signing. The poster was the self-portrait of Warhol which was printed for the Institute of Contemporary Art, Boston, October 1 – November 6, 1966.

An article on the University of St. Thomas website details Warhol’s visit, with photographs reproduced here, including one of Warhol signing posters, with an example of this poster on the wall behind him. The image reproduced is  Warhol’s 1966 “Self Portrait’, based on a photograph by Rudolph Burckhardt.  The poster is printed in black and silver ink on card stock, and measures 21 1/2” x 34”. Warhol has signed his name and “1968” in blue ballpoint pen, adding “UST” followed by what looks like an exclamation point.

The poster has been restored and linen backed, with some touching up to the ink, pinholes filled, and some adhesive on the back removed.  Warhol’s signature was not touched in any way.  Some light creasing is visible from close up, but as the graphics are very bold, and when framed this will be barely noticeable.  The nearly 3′ tall poster looks dramatic and impressive in person.
An unsigned example of this poster sold in 2016 at auction for $5400.
A rare, vintage signed Andy Warhol and Velvet Underground collectible.  With Recordmecca’s written lifetime guarantee of authenticity, and an email from the original owner describing how she came to have Warhol sign it for her.