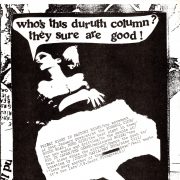 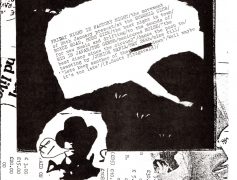 A very rare handbill advertising Big in Japan and Manicured Noise at Manchester’s Factory Club, on May 26, 1978; from the archive of Factory Records co-founder Tony Wilson.

This show was promoted by ‘The Movement of 24th of January’, a short-lived name used by Tony Wilson and Alan Erasmus, soon to found Factory Records and sign Joy Division, Durutti Column and many other iconic bands.

Tony Wilson, then a TV presenter on Granada TV, had joined friend Alan Erasmus in managing the Durutti Column, and the two convinced the owner of the Russell Club in Hulme to allow them to book bands on a few Friday nights.  While walking around Manchester, Erasmus saw a sign reading “Factory closing” and said “Let’s call the club The Factory, because we can have a factory opening instead of a factory closing.  This show was the second Factory Night at the Russell Club.

While the handbill is headlined “Who’s this durutti column? They sure are good!” we can find no documentation that the group appeared that night.  It’s possible they did, or that Wilson was just using this handbill as an opportunity to get their name out.

This show is one of four Factory shows advertised on Peter Saville’s celebrated “Use Hearing Protection” poster (FAC 1.)

We acquired this handbill directly from Tony Wilson’s family.  It has been stored at Manchester’s Museum of Science + Industry since Wilson’s 2007 death, and is in mint condition.  8 ¼” x 11 ¾” (A4), printed on thin stock.

Included is a letter of authenticity from the archivist of The Tony Wilson Archive reflecting its extraordinary provenance, and Recordmecca’s written lifetime guarantee of authenticity.

(Note: Big in Japan featured Holly Johnson, later of Frankie Goes to Hollywood, Bill Drummond of the KLF, and Budgie of Siouxie & the Banshees.)