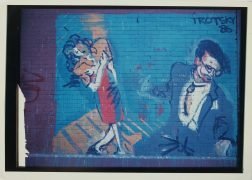 A vintage 14″ x 20″ photograph of the complete wall mural used, in part, on the album cover of Bob Dylan’s 1989 album Oh Mercy.  According to Wikipedia, Dylan saw the mural “on a wall of a Chinese restaurant in Manhattan’s Hell’s Kitchen on 9th Avenue and 53rd Street. The artist, Trotsky, who created the image of two people dancing was located (he lived near the mural) and permission was granted.”