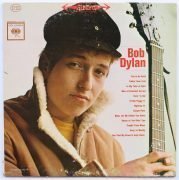 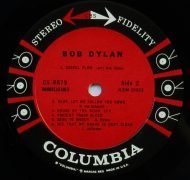 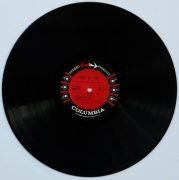 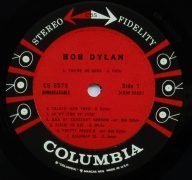 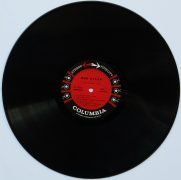 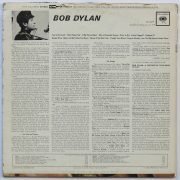 Columbia Records changed their label design to a solid red design a month or two after the release of Dylan’s first album, making the black/red “6-Eye” first pressings extremely desirable. Dylan was a virtual unknown when this album was released and it sold very poorly. Stereo records were just being introduced at this time, selling primarily to the audiophile market–and costing $1.00 more than Mono records. Consequently very few Stereo first pressings were made.

The disc here is in EX+ condition and sounds great; there is a silent and unfeelable scuff on Side 2, but the surface is otherwise beautiful. The original cover, without John Hammond’s producer credit (the earliest variation) is in VG+ condition, with some ringwear to the front, and on the back some minor chipping to the top and left edges.  A highly collectible Dylan rarity.