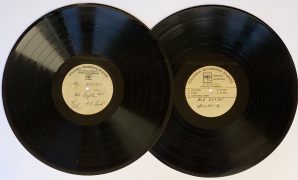 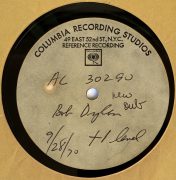 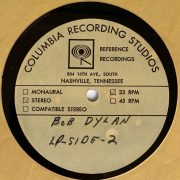 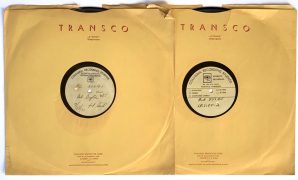 Two 12” acetates of Bob Dylan’s 1970 album New Morning, previously owned by Dylan, and used by him during the making of the LP.

These one-sided acetates were cut directly from the master tapes, and feature the final version of the album.  One disc’s label is dated 9/29/70, just three weeks before the album’s October 19, 1970 release, and features Dylan’s handwritten notation “New Dub.”  Dylan tried various sequences of the album before settling on the one here, and “New Dub” indicates this is a revised lineup.

These are part of a collection of Dylan-owned acetates discovered in 2014 in a five story brownstone at 124 West Houston Street in Greenwich Village.  From approximately 1969 through 1972, Dylan rented the building’s ground  floor to use as a studio (at the time, he lived two blocks away at 94 McDougal St.)  When the owner of the building died in January 2014, her executor found the acetates in two boxes labeled “Old Records,” in a a loft closet above the bedroom. The discovery of these acetates by Recordmecca’s Jeff Gold received extensive media coverage in publications including The New York Times, Wall St. Journal, Rolling Stone, and Billboard (for the complete story and more photos, see the Recordmecca blog.)

The West Houston St. Studios acetates originally belonged to Bob Dylan, and were used by him during the production of his albums, including New Morning.  At the time Dylan was based in New York, while his producer, Bob Johnston worked out of Columbia Records’ Nashville office.  Taking direction from Dylan, Johnston would cut acetates of various mixes and sequences, and send them to Dylan for his comments or approval.  Dylan discarded or abandoned them when he moved out of the building in the early 1970’s. For more than 40 years, they were carefully stored by the building’s owner, and only discovered by chance by before the building was put up for sale in 2014.

Cut directly from the master tapes, the acetates have fantastic fidelity.  Grading VG++ they sound bright and bold, with only the occasional surface noise, light pop or tick.  They have probably been played no more than a few times, by Dylan himself.   Each label has Dylan’s name and other information in an unknown hand (other than Dylan’s note “New Dub”.) The original Transco acetate sleeves are present, with the typical age related chipping.

A remarkable Dylan artifact formerly owned by Dylan himself.