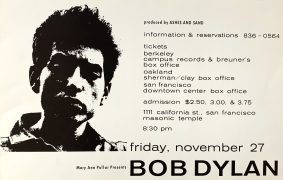 This show took place at a critical time in Dylan’s career; in July, he’d been a headliner at the Newport Folk Festival, and on August 8 he released his fourth album, Another Side of Bob Dylan.  On August 28, he famously met The Beatles at New York’s Delmonico Hotel, turning them on to marijuana for the first time.  On September 8 he began his fall tour, and on September 20th he attended The Beatles concert at New York’s Paramount Theater, spending time with them afterward.  On October 31, Dylan played New York’s Philharmonic Hall, bringing on Joan Baez as a special guest (the “Halloween Concert” was later released as Vol. 6 in Dylan’s Bootleg Series.)  Baez again joined Dylan on stage during his November 25 San Jose show, and two days later at the concert this poster advertises.  The tour ended on December 7 in Santa Barbara, and after taking the rest of the month off, he entered the recording studio on  January 13, 1965 to begin recording his next album, Bringing It All Back Home.

A partial recording of the San Francisco concert can be heard on Youtube; Dylan plays ‘Gates of Eden’, ‘If You Gotta Go, Go Now’, ‘It’s Allright Ma (I’m Only Bleeding)’, ‘Talkin’ World War III Blues’, ‘Don’t Think Twice, It’s All Right’ and ‘Mama, You Been On My Mind’ (with Baez).

The poster is near mint condition, and printed on card stock, measuring 17″ x 11″.