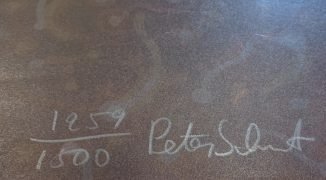 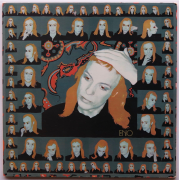 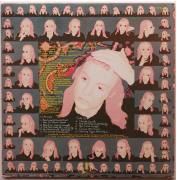 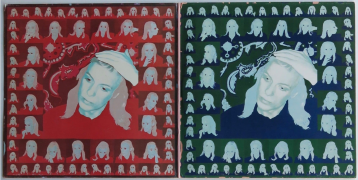 One of a limited edition of 1500 unique lithographic portraits of Brian Eno, produced in 1974 by his collaborator (and Oblique Strategies co-creator) Peter Schmidt.

For this edition, Schmidt (1931-1980) created 1500 signed and numbered lithographs, each with a unique color scheme, based on a set of Polaroid portraits of Eno.  Four were chosen to be used on the album cover of Eno’s second solo album, Taking Tiger Mountain By Strategy.

When the album was released, Island Records in the UK and US distributed some of the edition to record retailers, disc jockeys and industry insiders.  At the time Eno was a fairly obscure cult artist, and many were used for displays, tacked up to walls, and ultimately discarded.  As Eno’s reputation grew, these lithographs became highly collectible–but finding one in excellent condition became nearly impossible.

This extraordinary example was given by an Island executive to a Los Angeles record store employee in 1974, and has been archivally stored in a flat file for 45 years.   Numbered 1259/1500 and signed by Peter Schmidt in pencil in the lower right corner.  Near mint, with a small soft crease to the upper right corner.  A superb and highly desirable Eno collectible.  17 1/4″ x 25 1/8″.

[Album shown for reference only and not included.]