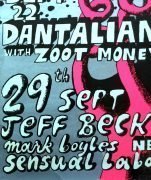 One of the most sought after of all British concert posters, this was designed by Australian pop artist Martin Sharp, a close friend of Eric Clapton who co-wrote Cream’s “Tales of Brave Ulysses” and designed their Disraeli Gears and Wheels of Fire album covers.  It was printed (actually silkscreened) onto silvered paper by TSR, and is number OA 120 in the highly collectible Osiris poster series.

Dantalian’s Chariot was the short-lived, but highly regarded group fronted by keyboardist Zoot Money, and featuring future Police guitarist Andy Summers.  Wikipedia notes their live performances featured psychedelic light shows. and the band would all wear white robes and kaftans in concert, with all of their equipment painted white to heighten the effect.  Their sole single, “Madman Running Through the Fields” is considered a psychedelic classic, and can fetch upwards of $300.  After the band broke up, both joined Eric Burdon & The Animals.

At the time of their show, the Jeff Beck Group had not yet begun recording their debut album, Truth, but had released two hit singles, “Hi Ho Silver Lining/Beck’s Bolero” and “Tallyman/Rock My Plimsoul”.  Ten Years After released their self-titled debut album a month after this show.

The poster is screened in metallic inks, and printed on fragile, thin paper.  It has undergone professional restoration, most significantly to replace small missing pieces to the top left and bottom right corners, and to the left edge by the heart (see detail photos).  Some edge tears have been repaired, and there is some creasing and a few long flattened horizontal folds.  Thanks to the busy design, the restoration is only visible upon close inspection, and overall the poster displays beautifully.