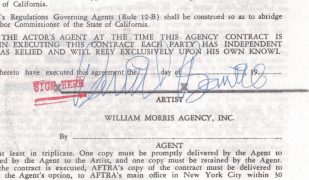 The two page double-sided contract is dated August 30, 1972, the day Bowie played the sixth and final show of his legendary run of Ziggy shows at London’s Rainbow Theatre.  Bowie played his first-ever US date only three weeks later, on September 22 at the Cleveland Music Hall.

With this contract, Bowie and the Spiders (named here as David Robert Jones p/k/a David Bowie, Michael Ronson, Trevor Boulder and Michael Woodmansee) hire the Morris Agency as their exclusive representative for transcription (aka recording), radio broadcasting and television, in exchange for 10% of all fees received by the artists.

Bowie signs his full name in blue ballpoint to the final page; on a second attached copy of the signature page an unknown William Morris agent signs in turquoise felt tip pen (this second page has copies of the signatures of Mick Ro, Trevor Boulder and Woody Woodmansey.)