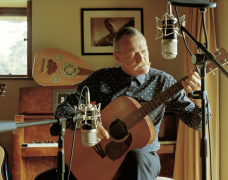 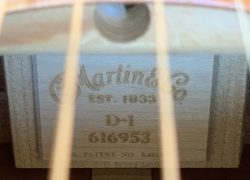 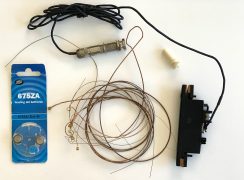 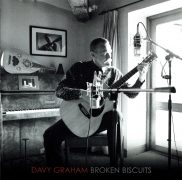 Graham’s 2008 obituary in The Wire noted “As a singer and arranger Davy Graham revolutionized guitar playing in the early ’60s and enjoyed a long career as England’s greatest: if often over-looked, guitarist. Revered by several generations of guitarists, he invented the Folk-Baroque style, invented a modal tuning system for the guitar called DADGAD and composed the signature tune of the ’60s folk revival, “Anji”. Credited for sparking the 1960s folk revival in England, he has inspired artists and fellow players such as Bert Jansch, John Renbourn and Paul Simon. “I wanted to be Davy Graham,” John Martyn once said. Jimmy Page [who based his solo in “White Summer” on Graham’s “She Moved Through The Fair”] and Robert Plant of Led Zeppelin have cited Graham as an influence to their music. Folk Rock bands such as Fairport Convention and Pentangle also show large Graham influence.”

We acquired this guitar directly from Graham’s record producer, label owner and promoter Mark Pavey, who explains in the accompanying letter of authenticity:

I purchased this instrument [Serial Number 616953] from Acoustic Workshop in Wapping in 1996 [and] used it to record my first two albums… and subsequently had a Fishman pick-up fitted for occasional live use.  In 2004 I had started promoting music nights in London and Oxford… [and met] Davy Graham.

He had suffered a burglary some years earlier and only had a cheap Hohner nylon string guitar.  He was greatly impressed with my Martin and started to use it to re-acquaint himself with steel strings. It wasn’t my only guitar at that time…Davy needed it and liked it, so I gave it to him.

He kept it until shortly before he passed away in 2008, when he returned the instrument to me. He used it exclusively for three years (to the exclusion of other people, although not guitars) alongside his later acquired endorsement guitars from Fylde and indeed Martin. He continued to enjoy the Martin D1 for its playability and light response. It is a special instrument, as it the one he used to reacquaint himself with steel strings. He always said that nylon string were the feminine instrument and steel the masculine. The provision of this instrument was an initial symbol of my trust in him and his trust in me.

Early on in our friendship he would call me in the morning and play inspired guitar figures on the instrument, the likes of which never managed to commit to tape under the pressured situation of a studio. The guitar is, as you would expect, in good used condition. There is a small crack on the back, which was professionally repaired by a luthier in Denmark Street in 2006.

He used the guitar for many live performances and in the studio when we were recording his final sessions. [Signed] Mark Peavy

This guitar was used on Graham’s final album, Broken Biscuits (produced by Pavey), and comes with a beautiful high-resolution digital photograph of Graham playing it during the recording sessions.

A museum quality collectible from, in our opinion, the greatest and most influential British folk guitarist ever.

[Note: this will be shipped at cost, TBD]