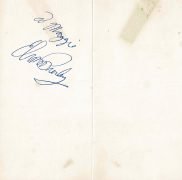 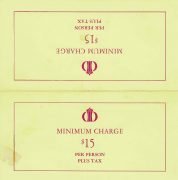 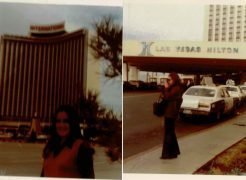 A table card from the Las Vegas Hilton International Hotel showroom, signed on the back “To Maggie, Elvis Presley.”

As explained in the lengthy accompanying letter from the original recipient, she was one of two “English Nannies” working in Los Angeles, who traveled in February 1972 to Las Vegas to see Elvis perform.  After the show, they met a group of men who told them they worked for Presley’s manager, Colonel Tom Parker.  Asking if they might meet the star, they were directed to Presley’s bodyguard and Memphis Mafia member Red West.  After one failed attempt, West did arrange for the girls to meet Presley two days later,  in his penthouse suite.  She writes Generally we felt here was a modest, and rather shy guy—which made him even more attractive.  I managed to get his autograph on the card from the show ticket [the table card].  I apologized this was all I had for him to sign.  The price of ‘$15 minimum charge’ on the front prompted Elvis to say “I don’t think that’s very cheap”—which seemed to imply to use he felt the ticket price was quite high (for 1972.). I did eventually find the courage to ask Elvis if he would ever be going to England?  He said he would love to go some day.

Maggie’s letter of provenance includes much more detail about the nannies meeting Presley; also included are copies of two photographs of her outside the Las Vegas Hilton.

The autograph has been authenticated by leading music autograph expert Roger Epperson; his Certificate of Authenticity is included, as is Recordmecca’s written lifetime. guarantee of authenticity.

From Wikipedia: Elvis Presley was signed for a four-week engagement [at the Las Vegas Hilton] in 1969 as the second performer to appear in the International’s showroom, following Barbra Streisand. It would be his first public stage appearance in eight years. Presley’s first show proved so popular that the hotel immediately signed him to a five-year contract for two month-long engagements per year. He would go on to perform a total of 636 shows at the hotel from 1969 to 1976, with every show sold out. Presley’s run of performances at the Hilton was cut short by his death in August 1977. During his engagements at the hotel, Presley famously resided in the 5,000-square-foot (460 m2) Imperial Suite on the 30th floor. Years after his death, the suite was renamed as the Elvis Presley Suite.