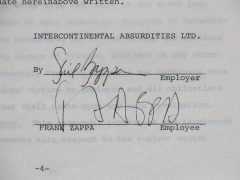 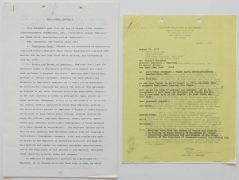 Zappa agrees, in part, to a five year term where he will “faithfully perform his duties…devoting his best efforts and attention to Employer’s business…it is contemplated that from time to time, he shall render his non-exclusive services for Employer in other phases of the record, music, literary and entertainment business.  Zappa further grants Intercontinental Absurdities “the exclusive right to license the use of his name, voice, likeness, signature, endorsement and biographic material in connection with the promotion, exploitation and sale of his services…”  While Zappa was in essence working for himself, this seems a bit ironic, considering Zappa’s well known anti-corporate attitude.

Also included is an August, 1973 letter from Zappa’s accountant, Richard Melchner, to his attorney, Martin Cohen, detailing Zappa’s employment with Intercontinental Absurdities, minimizing Zappa’s taxes, and his yearly salary from the company, including the number of concerts he performed and referencing his injury (at a UK concert) that prevented him from performing in 1972, along with a carbon copy of Cohen’s response to Melchner.