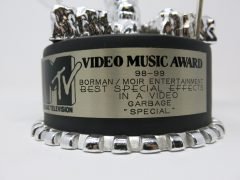 An original MTV Video Music Award, presented to the band Garbage in 1999 for Best Special Effects in a Video, for their science-fiction themed video “Special”.  The MTV ‘Moonman’ Award is one of the most highly sought-after awards among collectors, partly because of its rarity, and partly because of its extraordinary design.

This example was given to Garbage’s management company, Borman-Moir Entertainment, and is in excellent condition.  There is a bit of minor scuffing and two barely noticeable very thin scratches to the back of the base, but this example is otherwise without flaws.  12 1/2″ from the bottom to the top of the flag, and 5″ in diameter.

Only the second example we’ve had in more than 20 years.  With Recordmecca’s written lifetime guarantee of authenticity.