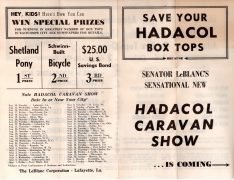 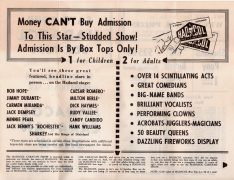 In 1951, Hadacol owner Senatory Dudley LeBlanc (of Louisiana) promoted Hadacol by sending the Hadacol Caravan Show around the country on a 17-car train called the Hadacol Special.  The shows featured bicycle giveaways, beauty contests, and clowns selling Hadacol. Jack Dempsey, Milton Berle, Jimmy Durante, and Cesar Romero joined the show, which played for a month straight in Los Angeles. Hank Williams played the final act of the show and brought people to their feet every night.

This evocative handbill measures 8 1/2″ x 11″ and was originally folded down the middle for distribution.  In very good+ condition, with some minor curling from age.  How many of these could have survived?