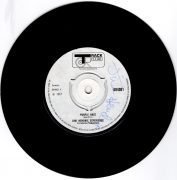 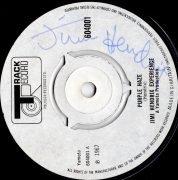 “Purple Haze” was the first record released on Track, the label formed by Chris Stamp and Kit Lambert, managers of The Who.  As Track was not fully operational when Hendrix’s debut single, “Hey Joe” was ready for release, it was issued on Polydor.

Only the earliest UK copies of “Purple Haze” had white labels; subsequent copies had Track’s typical black labels.  It’s fortunate the fan who got this signed had a first pressing, as the white label provides excellent contrast with Hendrix’s signature, in blue felt tip pen.

“Purple Haze” is one of Hendrix’s best known songs, and the record that brought him worldwide attention.  Released in the UK on March 17, 1967, it peaked at #3, staying on the charts for 14 weeks.  Reprise Records, Hendrix’s US label, issued “Purple Haze” on June 19, 1967, the day after Hendrix’s incendiary performance at the Monterey Pop Festival–the Hendrix Experience’s first American show.

Q magazine ranked “Purple Haze” #1 in its “100 Greatest Guitar Tracks Ever ” and Rolling Stone named it #2 on its list of “100 Greatest Guitar Sogns of All Time”, noting the song “unveiled a new guitar language charged with spiritual hunger and the poetry possible in electricity and studio technology”.  Author Dave Marsh called it the “debut single of the Album Rock Era”, and NPR included it on its list of the “100 Most Important American Musical Works of the 20th Century” in 2000.  In 2000, it was given a Grammy Hall of Fame Award which highlights “recordings of lasting qualitative or historical significance”.

Authentic signed Hendrix records are virtually impossible to find; in nearly 50 years of Hendrix collecting, this is the first we’ve had.  Of the few genuine signed ones we’ve seen but not owned, this is by far the best, with a perfect signature, no fading or contrast issues, and on one of his most important records. (Unfortunately there is no shortage of Hendrix forgeries).

The autograph has been authenticated by Roger Epperson, the world’s foremost music autograph authenticator; his Certificate of Authenticity is included, as is Recordmecca’s written lifetime guarantee of authenticity.