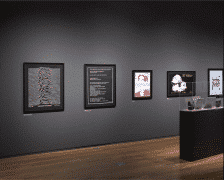 Legendary graphic designer Peter Saville based the Unknown Pleasures album cover on an illustration of a pulsar, from the Cambridge Encyclopaedia of Astronomy, explaining the band “very astutely spotted this image as potentially a wonderfully enigmatic symbol for a record cover.”  In the intervening years, the Unknown Pleasures artwork has become an iconic and instantly recognizable image.

We acquired this directly from the archive of Joy Division/New Order manager Rob Gretton (1953-1999), and it is accompanied by a signed letter of authenticity from Gretton’s partner, Lesley Gilbert, noting its provenance. The Gretton collection archivist told us these posters were made for fly posting, were not widely used, and few survived.  Some were pasted up in the lobby of the Apollo Manchester during the Buzzcocks /Joy Division  show on October 27, 1979.  An example of this poster was included at the Manchester Art Museum’s 2017 exhibition True Faith, which explored the legacy of Joy Division and New Order.

An extraordinary poster with exceptional provenance.