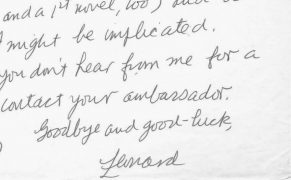 Leonard Cohen – 1963 Handwritten Letter From Cohen in Greece to His Editor, Regarding Drug Bust

An extraordinary handwritten letter from Leonard Cohen to his editor at Viking Books, Corleis ‘Cork’ Smith, regarding a press release, and a narcotics arrest in which Cohen fears he may be implicated.

Dated August 26, 1963 and and sent from his home on the Greek island of Hydra, Cohen writes:

Dear Cork, The release is very funny.  Make everybody print it.  Who will print it?  Thank-you, Julie.  Courage!  This reply is delayed because of a lot of terrible things.  A friend has been arrested for possession of narcotics (what a dreary literary cliche-and a 1st novel, too) and it seems I may be implicated.  If you don’t hear from me for a while–contact your ambassador.  (Goodbye, Sheila, thank-you).  Goodbye and good-luck, Leonard

This letter was written while Cohen was trying to earn a living as a poet and writer,  a few years before taking up music as a professional pursuit.  Wikipedia notes, Cohen continued to write poetry and fiction throughout much of the 1960s and preferred to live in quasi-reclusive circumstances after he bought a house on Hydra, a Greek island.  Cohen lived on Hydra with Marianne Ihlen, his muse and the subject of several of his best-known songs, including ‘So Long Marianne.’  Cohen’s first novel, The Favorite Game, was released in the UK in October, 1963, two months after this letter was written, and the first line, referencing a release, likely refers to a press release Smith has sent him to approve, while the Julie he mentions is likely the release’s writer.

Cohen then references a drug bust in which he might be ensnared, ominously (or perhaps ironically) suggesting that if he becomes unreachable, Smith should contact the authorities, adding a note of thanks and farewell to Smith’s wife, Sheila.

Also included is a carbon copy of a September 3, 1963 response from Cork Smith’s secretary to Cohen, letting him know that Smith is out of the office, but will respond when he returns.

This letter was part of the collection of Cork Smith (1929-2004), a New York book editor who in a 50-year career published many important writers, including Thomas Pynchon,  Jimmy Breslin and Calvin Trillin.  Handwritten letters and written works by Leonard Cohen are exceedingly rare; a 2019 auction of his correspondence with Marianne Ihlen saw a 1960 letter sell for $56,250. while a 1964 letter sold for $35,000.

A museum-quality Leonard Cohen collectible from an important time in his life.  With Recordmecca’s written lifetime guarantee of authenticity.