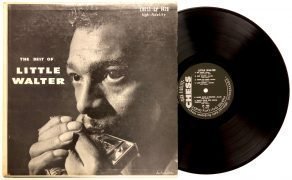 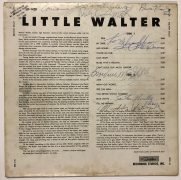 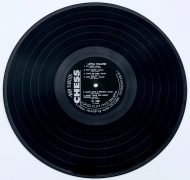 A 1958 Chess Records  first pressing of The Best Of Little Walter, signed back cover by the stars of the 1964 American Folk Blues Festival, the touring group who played the UK and Europe to great success.  They were filmed during their UK tour and the resulting program has been released as the film Blues and Gospel Train.

While Little Walter was not part of this tour, nor did he sign this album, it is autographed by Muddy Waters, Sister Rosetta Tharpe, Otis Spann (who adds “To my friend from”), Cousin Joe Pleasant, Brownie McGhee, Ransom Knowling and Willie Smith.  Our guess is the fan who got this signed probably owned a single blues album (quite rare and expensive in the UK in 1964!)  and brought it hoping to get anyone he could to sign it.

The album cover is VG++, with the original shop stamp and price in the top left back cover; the disc is in VG+ condition and plays well with occasional light surface noise.  A very rare album, signed by some of the giants of the Blues.  With Recordmecca’s written lifetime guarantee of authenticity.