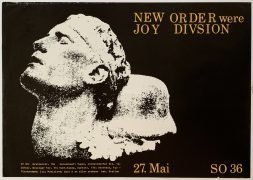 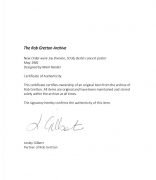 A superb concert poster for an early New Order concert in Berlin, Germany at SO 36, on May 27, 1981.  At the time of this show, New Order had only released one single, “Ceremony,” in January 1981.  Their debut album, Movement, wasn’t released until that November, nearly six months after this show–so it made sense to advertise them using the better-known Joy Division name.

The artwork is by Joy Division associate and Factory Benelux head Mark Reeder.  We acquired this poster from the archive of the late Joy Division/New Order manager Rob Gretton; it is accompanied by a letter of noting its provenance from the Rob Gretton.  In excellent unused condition, with some minor fraying to the edges.  33” x 23 ¼”.