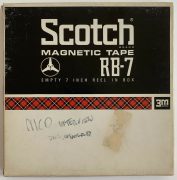 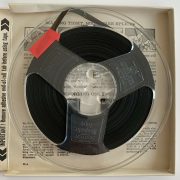 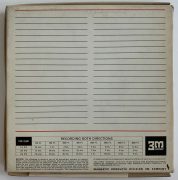 A unique and unpublished/undocumented tape of Elektra Records ‘house hippy’ Danny Fields interviewing his close friend Nico, in advance of the release of her 1968 Elektra album The Marble Index.
We purchased this years ago from Fields, who later managed The Stooges and the Ramones.  The 20 minute tape is a discussion between Fields and Nico, about her forthcoming album, which at that time was still untitled.  Nico’s answers Fields’ questions in her typically enigmatic way.
They discuss possible album titles, he asks her why she wants people to know about her (she says she doesn’t), he asks what she wants the album to be for her, and she answers “Can’t say any more, not so peaceful, doesn’t represent peace any more, does it?  What should I want it to be, my autobiography?  It’s very much like me, it’s me, everything about it really” and “It’s just pictures as I like to see them…cause I like to see pictures in every certain way, my own way.”  “It’s not much, it’s very bare” she continues.”
There are mentions of Leonard Cohen, of Donovan being accused of copying Bob Dylan, and the title of Tim Buckley’s album Hello and Goodbye.  Nico says “maybe I should call the album Today, that would make sense…they are timeless songs, they are not personal…could have been 10 million years ago, they could have been today…I don’t think they have to do with time.”  She says maybe she should call the album “On a Day Like This, that would make sense”, which Fields thinks wouldn’t be a good album title but maybe a good song title.
This tape has never been circulated or even written about.  We have had it in our private collection for many years, but the time seems right to pass it on to a collector.  The 7″ reel is in its original Scotch tape box, on the cover is written simply “Nico Interview [indecipherable word] Los Angeles.”  With a digital transfer of the audio.  (Sorry, we will not make copies.)