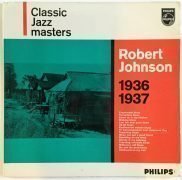 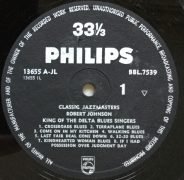 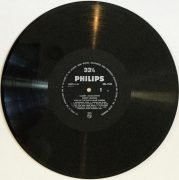 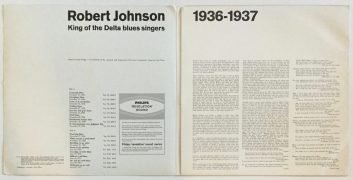 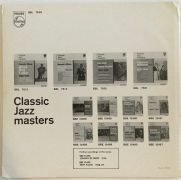 A rare UK first pressing of Robert Johnson 1936-1937, issued as part of Phillips Records Classic Jazz Masters series in 1962.  This was the first Robert Johnson album issued in the UK, and was tremendously influential to the Rolling Stones, Eric Clapton and many others.

As Keith Richard wrote: Brian Jones had the first album, and that’s where I first heard it. I’d just met Brian, and I went around to his apartment-crash pad, actually, all he had in it was a chair, a record player, and a few records. One of which was Robert Johnson. He put it on, and it was just-you know-astounding stuff. When I first heard it, I said to Brian, “Who’s that?” “Robert Johnson”. I said, “Yeah, but who’s the other guy playing with him?” Because I was hearing two guitars, and it took me a long time to realize he was actually doing it all by himself.

This album features the same tracks as the US Columbia LP King of the Delta Blues Singers album, but has a altogether different gatefold album cover (the Columbia/CBS album wasn’t released in the UK until 1965).

The high quality disc is in Near Mint condition and looks barely played; the cover is EX++ with some extremely minimal wear. One of the very few copies we’ve had, and in superb condition.