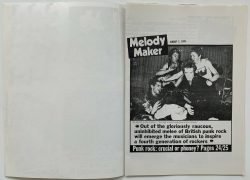 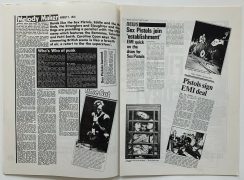 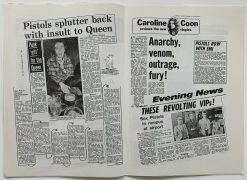 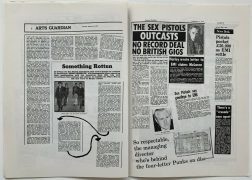 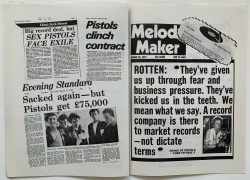 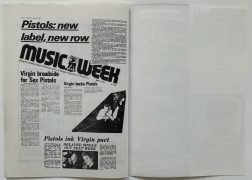 A rare May 1977 press kit for the Sex Pistols issued by Pistols manager Malcolm McLaren’s Glitterbest Ltd., in conjunction with the release of the Sex Pistols’ second single, “God Save the Queen.”

This is the fourth (and perhaps rarest) of the Glitterbest Sex Pistols press kits, and undoubtedly the most interesting, as it details the entire chaotic history of the Pistols via articles from the UK press, from the early days of the punk movement through the release of their masterpiece second single; and includes reprints of Melody Maker article detailing the chaos around the band, their signing to EMI, the Bill Grundy affair, being dropped by EMI, insulting the Queen with their new song GSTQ, their signing and dropping from A&M, and Virgin signing and their upcoming single, “God Save the Queen”.

The Glitterbest press kits are similar in format, but as the Pistols’ story evolved, new versions were produced, incorporating more recent press coverage. Each can be approximately dated by looking for the latest article included; in this case, May 21, 1977, a week before the UK release of “God Save the Queen”.

The Glitterbest press kits were designed by Jamie Reid and Glitterbest’s Sophie Richmond, and printed by Reid’s Suburban Press.  16 pages, with covers printed on thin card stock.  In near mint condition, 8 1/4″ x 11 3/4″.  With Recordmecca’s written lifetime guarantee of authenticity.