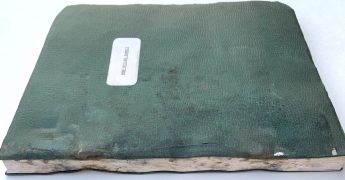 Who Killed Bambi? was Malcolm McLaren’s planned Sex Pistols film, intended to help break the band in the United States.  McLaren hired legendary American sexploitation auteur Russ Meyer (Beyond the Valley of the Dolls) to direct, and future film critic Roger Ebert (who co-wrote Dolls) wrote the final script, with input from McLaren, Meyer, director Rene Daalder and Pistols US rep Rory Johnston. This script is the Seventh Draft, dated October 8, 1977, and has “Steve Jones” and “15” written on the first page, indicating this was Jones’ copy, and #15 of the scripts distributed.

Filming for Who Killed Bambi? began in October 1977, just after this script was registered with the Writer’s Guild of America.  It was disorganized from the start, with no real budget, and tensions between the band, McLaren and Meyer.  Sets were built, but after three days of filming, 20th Century Fox shut the production down.

The script is in good condition, with moisture damage to the green textured covers, some rust to the clips attaching the cover, and staining to some pages (the script is 145 pages long; every page is very clear and completely readable, and the staining is minimal other than the first five pages. The script has a slight musty smell.)