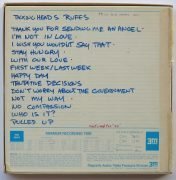 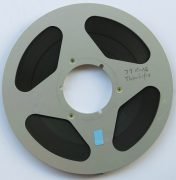 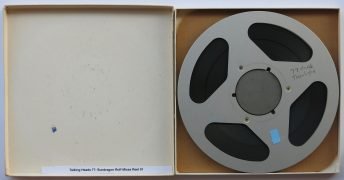 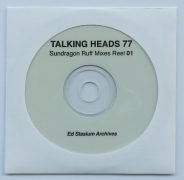 A unique reel-to-reel master tape of unreleased rough mixes of Talking Heads 77, with six alternate tracks.  We obtained this from Ed Stasium, the album’s co-producer/engineer/mixer, who describes this one-of-a-kind tape in his accompanying letter of authenticity:

“Ruff” mixes are quick one take reference mixes used for artist, producer, engineer and/or record company for listening and evaluation during the progress of the recording.  The actual final mix for “Talking Heads 77” was done at Mediasound whilst this “Ruff” was mixed very quickly at Sundragon Studios on a Roger Mayer recording console with limited outboard gear.  The recording console, individual track balances, panning, EQ, compression, reverb/delay effects etc are entirely dissimilar from the ones used on the final mixes.  Mediasound had a Neve 8068 recording console, an abundant amount of outboard gear and we only mixed a song a day (maybe two) spending considerably more time on the mixing as opposed to the “ruffs” which were probably done in one take.  From Sundragon Studios: “Ruff mixes of the freshly recorded basic tracks with reference vocals.  Several of these tracks were not included on the LP TH 77.

In addition to the alternate mixes described above, this tape includes six rarities which were recorded for Talking Heads 77, but weren’t released until 2005 as bonus tracks on remastered albums (likely with different mixes).

These include “Thank You For Sending Me an Angel”, “I’m Not In Love” and “Stay Hungry” (later included on the 2005 remaster of More Songs About Buildings and Food); “I Wish You Wouldn’t Say That” (B-Side of “Love ->Building on Fire”), and “Not My Way” (aka “I Feel It In My Heart”), both included on the 2005 remaster of Talking Heads 77, and the original version of “With Our Love” (likely a re-recording).