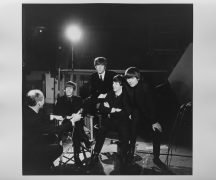 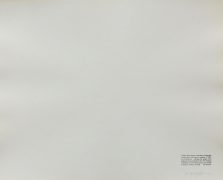 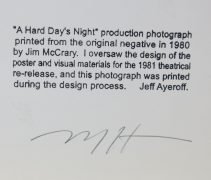 A spectacular 16″ x 20″ production photograph of The Beatles being interviewed by film producer Walter Shenson during the filming of A Hard Day’s Night. This print was made from the original negative.

The photograph was almost certainly shot by the film’s unit photographer Bert Cann.  A variant of this image is reproduced on page 9 of the book The Beatles: A Hard Day’s Night/A Private Archive by Mark Lewisohn.  This print was made circa 1980 by celebrated photographer Jim McCrary, who’s photographs graced the covers of many famed albums including Carole King’s Tapestry, Joe Cocker’s Mad Dogs and Englishmen, and albums by Cat Stevens, Lynyrd Skynyrd, Bobby “Blue” Bland, and B.B. King.

We acquired this print from legendary music business executive Jeff Ayeroff, who has signed the back of the print, below the legend “A Hard Day’s Night” production photograph printed from the original negative by Jim McCrary.  I oversaw the design of the poster and visual materials for the 1981 theatrical re-release, and this photograph was printed during the design process.

An extraordinary Beatles collectible in near mint condition and ready to frame; with Recordmecca’s written lifetime guarantee of authenticity.