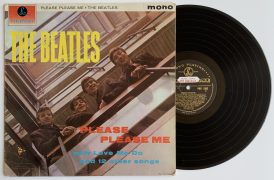 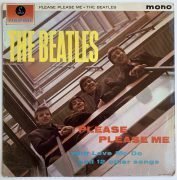 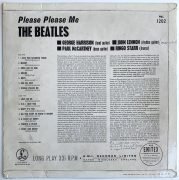 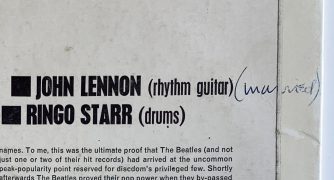 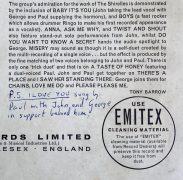 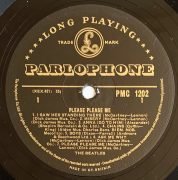 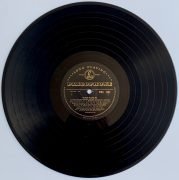 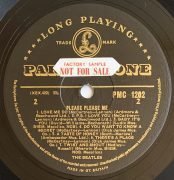 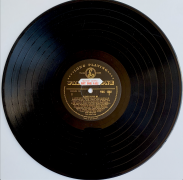 A historic promotional first pressing of The Beatles Please Please Me LP, hand annotated by John Lennon.  This was the Beatles press office copy, and has a remarkable history.  One of the first copies ever pressed, with 1G/1R stampers and Northern Songs publishing credits, it is in superb condition.

The accompanying letter of authenticity from UK Beatles specialists Tracks notes this is:

A UK mono Beatles Please Please Me sleeve on which John Lennon has written the word ‘(Married)’ after his name in blue ballpoint pen.  The sleeve was formerly the property of The Beatles press officer Tony Barrow [who wrote the liner notes to Please Please Me].  John Lennon was married to Cynthia Powell on the 23rd August 1962 at the Liverpool Mount Pleasant registry office and Paul McCartney and George Harrison were in attendance along with their manager Brian Epstein.  The marriage was not something that was highly publicised at the time and subsequently attempts were made to keep their union low profile because it was thought that John being married would adversely affect The Beatles popularity amongst the female fans.  Cynthia Lennon had in fact complained of being attacked in a Liverpool street by girl fans once they found out she and John were married.

However, revealingly, in a 2003 interview conducted by [Beatles historian] Mark Lewisohn, Tony Barrow stated that on one occasion when The Beatles were in the presence of a couple of reporters “John just went and wrote “married” on the press office copy of the Please Please Me album, inviting what did happen, which was one or two of the journalists asked me why it said that, I laughed it off as John’s little joke.”  Tony also told Mark that Brian Epstein never once asked him to deny that John was married.  It was John himself who asked Tony to keep the fact quiet–and then, as stated above, he undid his own wish by writing ‘(married)’ on the LP sleeve.  The signed sleeve is from the estate of Tony Barrow”.

Adding to the desirability of this album is the extraordinary disc, the earliest pressing and best example we’ve had–and one of a very few promotional copies in existence.  The 1G and 1R stamper numbers are thought to be the very earliest stampers, marking this as one of the first copies pressed of the first Beatles album released anywhere in the world. The black and gold first pressing labels, with the first Dick James Mus. Co. publishing credits, are in Near Mint condition.  A “FACTORY SAMPLE/NOT FOR SALE” label is affixed to the Side 2 label.   The disc grades Near Mint- (side 1) and EX+ (side 2).  The album has been very lightly played, and the surface is clean and shiny, with a few extremely superficial scuffs, and one feelable but inaudible mark.  It plays mint to near mint throughout, other than some barely audible ticks in “Please Please Me”.

The Ernest J. Day & Co. cover, with the Angus Bean photo credit on the right, is in EX to VG++ condition, with some creasing to the bottom left corner, but no significant issues.  Just below Tony Barrow’s liner notes credit is the neatly written notation “P.S. I Love You sung by Paul with John and George in support behind him.”  Tracks told us they assume this was written by Barrow, but could not confirm it.