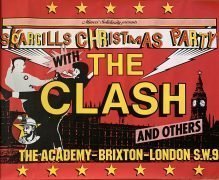 A concert poster advertsing two benefit performances by the Clash at London’s Brixton Academy, on December 6 and 7, 1984.  The shows, billed as Scargill’s Christmas Party, benefited striking British miners.  Arthur Scargill led Britain’s National Union of Mineworkers through the 1984-1985 miner’s strike, a major event in the history of the British labor movement.

According to owner Brixton Academy owner Simon Parkes, no other venue wanted to host such a raucous event. He said at the time: “The last thing they wanted was several thousand angry, hyped-up miners led by, horror of horrors, a punk band… The Academy, on the other hand, was made for this kind of thing.”  Soon after this show the Clash began their Out of Control Tour.

The bold and impressive poster is in near mint condition, with some very minor edge fraying, and a tiny invisible repair to one corner tip.   36 7/8” x 29 7/8”.