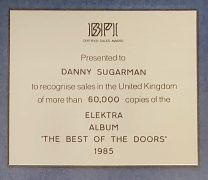 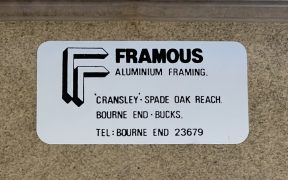 An original vintage BPI Silver Disc Record Award for The Doors 1985 album The Best of The Doors, presented to longtime Doors associate and manager Danny Sugerman (1954-2005), who also wrote the liner notes for this album.

BPI Awards are issued by the British Phonographic Industry, and are the UK equivalent to American RIAA Awards.  A Silver Disc Award certifies the sale of 60,000 albums in the UK.

We acquired this award directly from Danny Sugerman’s widow, Fawn Hall; her signed letter of authenticity is included, as is Recordmecca’s written lifetime guarantee of authenticity.

The award is completely original and in excellent condition.  This was issued in the year of the album’s release, and was one of the original Silver Disc awards made at that time.  BPI Awards are typically made in very small numbers, and awarded only to the artists, managers, and record labels.

[Note: In the past few years an abundance of fraudulent record awards have surfaced on Ebay and at auction houses; we strongly recommend avoiding any award that doesn’t come with provenance and a written lifetime guarantee of authenticity.]