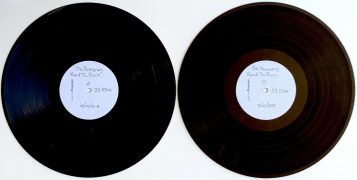 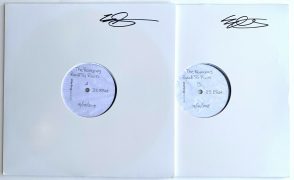 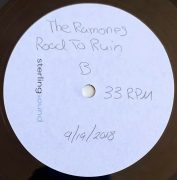 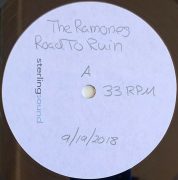 Two single-sided LP acetates of the Ramones’ ROAD TO RUIN (Remaster 2018) from the archive of legendary Ramones producer/engineer/associate Ed Stasium.  These were used during the production process, and the cover of each disc has been signed by Stasium.  Included is Ed Stasium’s signed letter of authenticity.
Stasium’s included letter reads:
This letter is to authenticate a 2 disc Reference Acetate Set of the Ramones album ‘Road to Ruin’ [Remaster 2018] from my personal collection.  During my long associate with the Ramones, I worked on nine of their original albums, as engineer, mixer, producer, additional guitarist and backing vocalist.  I have also engineered, remixed, and produced numerous demos, reissues and live albums for the band.  This reference acetate was used during the album’s production, and I have signed the sleeve.  Gabba Gabba Hey!  [signed] Ed Stasium.
These acetates are both in Mint condition, and of course, cut directly from the master tapes, insuring their exceptional fidelity.
Stasium was the co-producer of both Road to Ruin and the 2018 remaster.  A great Ramones collectible, directly from the source.