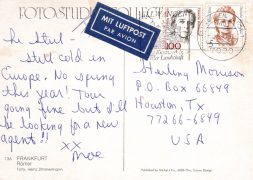 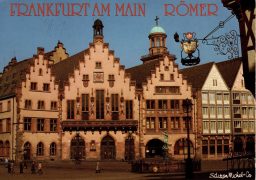 Hi Sterl – Still cold in Europe.  No spring this year!  Tour going fine but I’ll be looking for a new agent!! xx Moe.

In 1991, Tucker released her third solo album, I Spent a Week There the Other Night, which featured guest performances by Velvet Underground members Lou Reed, John Cale and Sterling Morrison; all four original members of the Velvets play together on “I’m Not”, making it their first studio collaboration on original material since 1968. The next year, the full group reunited for a 1993 European tour.

At the time Tucker sent this card, Morrison was living in Houston Texas, where he worked as a tugboat captain.

We acquired this postcard from Sterling Morrison’s widow, Martha Morrison; her letter of authenticity is included, as is Recordmecca’s written lifetime guarantee of authenticity.  A great Velvet Underground collectible, from an auspicious time just before the band’s brief reunion.