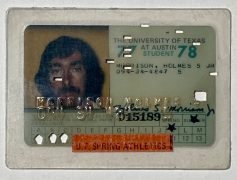 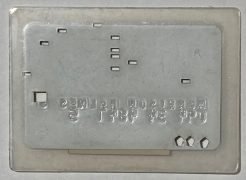 The laminated University of Texas Student ID has Morrison’s photograph, and is dated 1977-1978 and has his name and ID number embossed over his photo, similar to the embossing on a credit card–because this is three dimensional, it looks distorted on the scan here, but not in person.  There are a number of shaped punch-out holes which would be recognized by a card-reading machine.

In 1993 the Velvet Underground reunited with Morrison, and toured Europe to great acclaim; in 1994 Morrison was diagnosed with non-Hodgkins lymphoma, which claimed his life in August 1995.