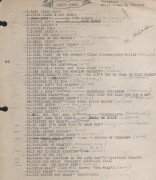 A list of fifty folk and original songs, typed and hand-annotated by Woody Guthrie, presumably for a songbook.  Woody lists 50 favorite songs from his repertoire, including virtually all his classics–This Land is Your Land (as This Land Was Made For You and Me), Pastures of Plenty, Grand Coolee Dam, So Long, It’s Been Good To Know You, Tom Joad, Talking Dustbowl Blues, John Henry, Poor Lazarus, Stacker Lee, Billy The Kid, Gypsy Davy, This Train and many more.

This probably dates from the mid 1940’s, as it Guthrie’s best-known song, This Land Is Your Land, is listed by an alternative title.  This Land is Your Land was published in 1945 and didn’t become a standard until years later.  In the mid 40’s, Guthrie made a mimeographed songbook for radio station WNEW; soon afterward, Herbert Harris of Stinson Records offered to help pay for a more elaborate edition.  In 1947 Guthrie wrote a biographical sketch for a book of his lyrics that Folkways Records owner Moe Asch intended to publish, titled American Folk Song.  It’s likely this list was created for one of these, or a similar project.

Guthrie has typed the titles of the songs he wanted included, followed by an asterisk (*) for “Original” or a number sign (#) for “Folk Song My Version.”  His wife Marjorie then categorized each song by type — “Outlaw”, “Work”, “Cowboy”, “War”, etc. (undoubtedly at Woody’s direction; her notes in pencil.)

Woody has doodled around the words “Fifty Songs” at the top of the page, and handwritten “x means MUST GO IN” and “- means REPLACE” as well as “TVA Lock & Dam” (a reference to songs Guthrie wrote in 1941 promoting hydroelectric dams, while in the employ of the US Government.  His notes in ink.)  It is likely he also made the pencil “x” and “-” marks denoting songs to keep or replace.  On the back of the page, Guthrie has written the song title “End of the Line,” and Marjorie Guthrie has written a list of “Songs Marjorie Wants.”

This has been authenticated by Woody Guthrie expert Barry Ollman, and his letter of authenticity is included, as is Recordmecca’s written lifetime guarantee.

A wonderful Woody Guthrie artifact, written at a prime point in his career, and illustrating both his working methods, and the songs from his huge repertoire he considered most important.  8 1/2″ x 11″.