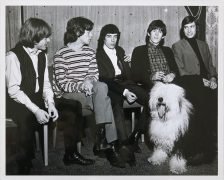 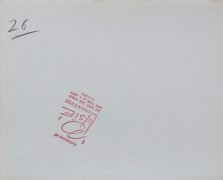 A rare vintage photograph of the Rolling Stones (and an English sheep dog) at a press conference in New York’s Astor Hotel, on June 2, 1964.  The Stones had just arrived in the United States for the first time, in advance of their first American Tour, which began June 5 in San Bernardino, CA and traveled to seven more cities.

This original hand-printed photograph, by William ‘Popsie’ Randolph, was made from the original negative and printed near the time the photograph was taken.  As a “vintage print”, it is much more collectible and valuable than a recent print.  Popsie’s stamped photo credit stamp is on the back.

William “PoPsie” Randolph (1920 – 1978) was a legendary  New York photographer of musical performers, movie stars, athletes and politicians.  He photographed everybody who was anybody in New York, from the 1940’s on, the musicians including Frank Sinatra, Elvis Presley, The Beatles, the Rolling Stones, Ella Fitzgerald, Billie Holiday and Miles Davis.