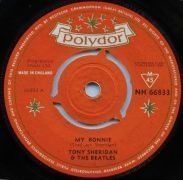 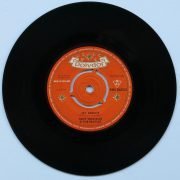 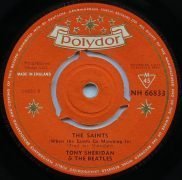 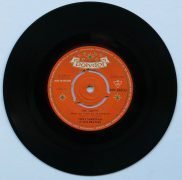 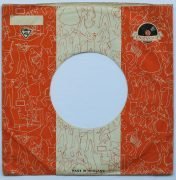 A UK first pressing of Tony Sheridan & The Beatles’ debut single “My Bonnie/The Saints”, the first record issued anywhere in the world to use the name “The Beatles”.   This very earliest issue is identified by the use of “broad type” on the labels.

Polydor Germany producer Bert Kaempfert signed English singer and guitarist Tony Sheridan, feeling he had ‘star potential’, hiring the The Beatles as his backing band.  As “Beatles” was close to the German slang term for male genitalia, “peedles”, Polydor released this 45 in Germany in October 1961, crediting The Beatles as The Beat Brothers.

English Polydor had no such concerns, and when they released the single in January 1962, they credited The Beatles on the label, making this the first record ever crediting The Beatles.  When The Beatles returned from Hamburg, customers began requesting the single from Brian Epstein NEMS store in Liverpool.  Curious that his clientele was requesting a record by a local band, he special-ordered the single, and went to see the group.

This release was not a success however, and was quickly deleted.  In June 1963, after The Beatles had a few hits on Parlophone, Polydor reissued “My Bonnie” with a slightly different, more narrow typeface (the reissue, while rare, is much more common that the first issue offered here).

This rare first pressing is in EX+ condition, with very clean labels and playing surface.  The original Polydor sleeve is included, in near excellent condition, with light wrinkling.

A very rare and important Beatles record from their earliest days as a recording group.