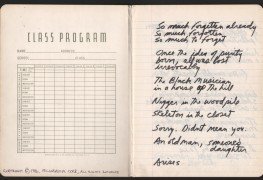 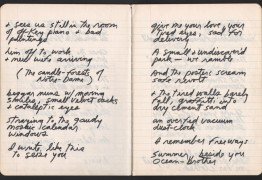 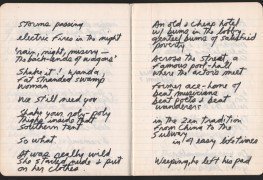 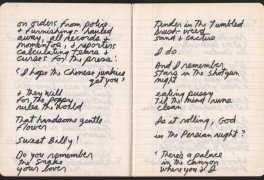 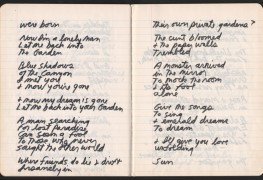 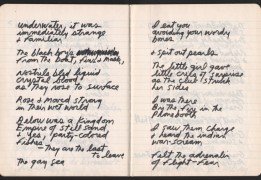 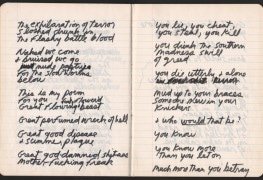 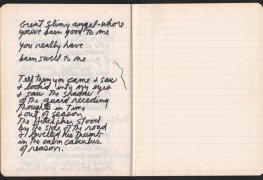 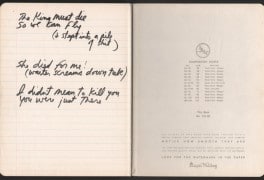 Jim Morrison’s legendary Paris Journal, possibly the last major work he completed before his death in Paris on July 3, 1971. The green composition notebook has “Paris Journal” written on the cover in Morrison’s hand, with the first 14 pages (double-sided) comprising a single epic handwritten poem by Morrison. The last page of the notebook features a second Morrison poem.

Wikipedia’s Jim Morrison page devotes a section to the Paris Journal, noting “amongst other personal details, it contains the allegorical foretelling of a man who will be left grieving and having to abandon his belongings, due to a police investigation into a death connected to the Chinese [opium] trade.”

The poem begins “So much forgotten already/ So much forgotten/ So much to forget”. Morrison evokes Paris (“The candle-forests of Notre Dame”), and drugs (“I hope the Chinese junkies/ get you/ and they will/ for the poppy/ rules the world”).  Other notable stanzas seem to evoke Morrison’s personal philosophy (“A man searching/ for lost paradise/ can seem a fool/ to those who never/ sought the other world”) and feelings about music (“Give me songs/ to sing/ & emerald dreams/ to dream/ & I’ll give you love/ unfolding”).

The Paris Journal is published in full in The American Night: The Writings of Jim Morrison Volume II (Vintage Books, 1990), which notes “The entire notebook consists of one angry, reflective and defiant poem.  As there are only three places in the notebook where words or phrases appear to be crossed out, this appears to be a clean and finished draft.  [Morrison] wrote the title “Paris Journal” on the front of the notebook’s black cover…These are among the last lines he wrote.”

The Paris Journal was part of the legendary 127 Fascination box, the archive of Jim Morrison manuscripts saved after Morrison’s death by his common-law wife, Pamela Courson.  After Courson’s death in 1974, the manuscripts went missing, and were rediscovered 1986 in Northern California, in a strongbox labeled “127 Fascination.” Courson had given them to a paramour in the Bay Area for safe keeping; and while he’d returned some of her possessions to her family, he’d kept the 127 Fascination manuscripts.

When the manuscripts resurfaced, attempts were made to publish them, but the Morrison and Courson families objected and a legal settlement was eventually hammered out.  After the settlement, The Paris Journal was sold, and has been in a private collection until now.

Scans of the Paris Journal were made available for to the Jim Morrison Estate at their request; included is a letter from Doors manager Jeff Jampol acknowledging their receipt, as well as a letter of authenticity from noted music autograph authenticator Roger Epperson.  Also included is Recordmecca’s written lifetime guarantee of authenticity.

[Note: The 1986 copyright date was added by the individuals who discovered the 127 Fascination box, prior to the legal settlement with the Morrison and Courson estates.]